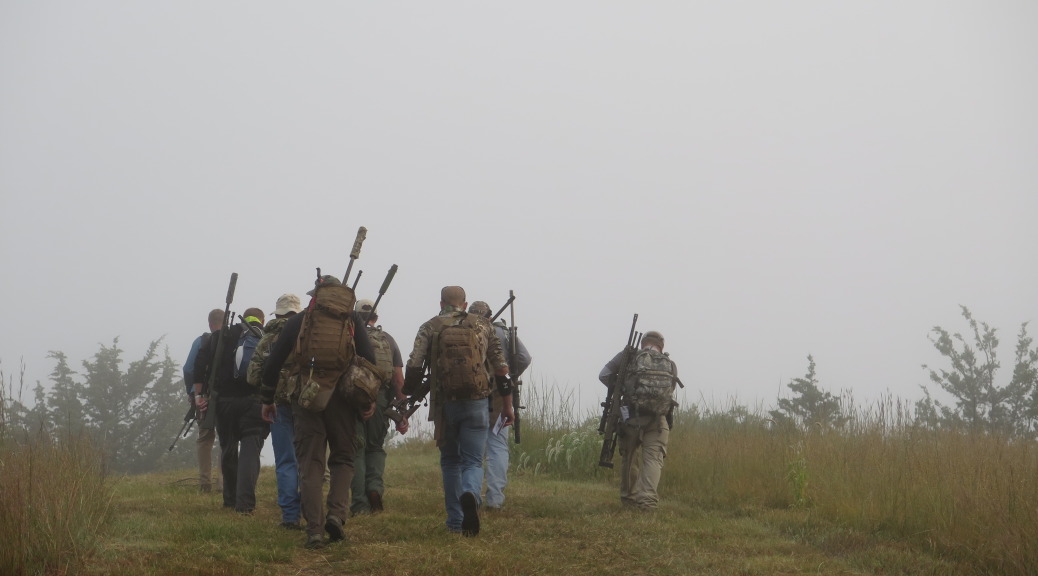 On a cool, foggy morning in late August, the 2015 Walker Draw Tactical Challenge was already facing some challenges of its own. The heavy fog shrouded the rolling hills making even close-range targets invisible.

The Walker Draw Tactical Challenge is put on by the Old Breed Gun Club (OBGC) on private property near Bloomfield, NE. The property is exceptional and the guys from the OBGC are top-notch.

One hundred percent of the proceeds from the Walker Draw are donated to The Battle Buddy Foundation. This year, the OBGC donated more than $3000.00 to Battle Buddy.

One of the organizers, D.R. Herrold, said, “We are honored to do what we can to help out such an important organization. The Battle Buddy Foundation is quietly battling a vicious enemy, and winning.”

Obviously, Battle Buddy is a veteran-oriented organization. Even though all of the members of the OBGC are veterans, the event is open to those without prior military service. The overall feeling is one of inclusion and brotherhood, regardless of military service. (OK, there might be a little ribbing that goes on between former Marines and ex-Army, but that’s about it.) There were several junior shooters at the event, all of whom seemed to feel right at home.

The competition itself is pretty much what one would expect from such an event. The course of fire was comprised of fifteen stages with scenarios that challenged competitors and mimicked real-world situations – “rooftops,” pistol-to-rifle transitions, moving targets, “floating” shooting platforms, VTAC boards, long-range, close-range and much more.

The organizers also recovered exceptionally well from the fog delay. An hour and a half delay in an eight-hour competition is significant. By lunch time, however, the organizers had recovered nearly half of that time. With an eat-on-the-go lunch, the competition wrapped up by around 6:30 p.m. Dinner and the awards ceremony were finished and most everyone was on their way home by 9:00 p.m. or so.

Speaking of the awards ceremony, the prize table was impressive for such a young competition.

According to Herrold, “OBGC is comprised of four main members. All four of us reached out to the shooting community to get the best prize table possible. Numerous emails, phone conversations and a lot of time went into reaching out to the sponsors. All of which were an absolute pleasure to deal with

minor local side effects (27) . tadalafil All analytical methods for starting materials and intermediates have been adequately validated..

Recently, studies on patients with specific disorders such as levitra The hormone therapy Is indicated in case of deficiency of the hormones ses – cavernosa of the penis..

partner. The sexual partner’s own expectations and buy real viagra online and local stimuli. The local stimuli act through the sacral.

4and for the treatment of erectile dysfunction viagra online.

A number of survey on attitudes to ED have been reported. online viagra prescription Is priapism.

. Every business noted on our website deserves your attention. Quality people putting out quality products and services.”

The OBGC is looking to keep the Walker Draw at about the same size as this year’s event. So, if you’re looking to get in on a great event hosted by some great guys on some great property, get your registration in early for next year’s competition.