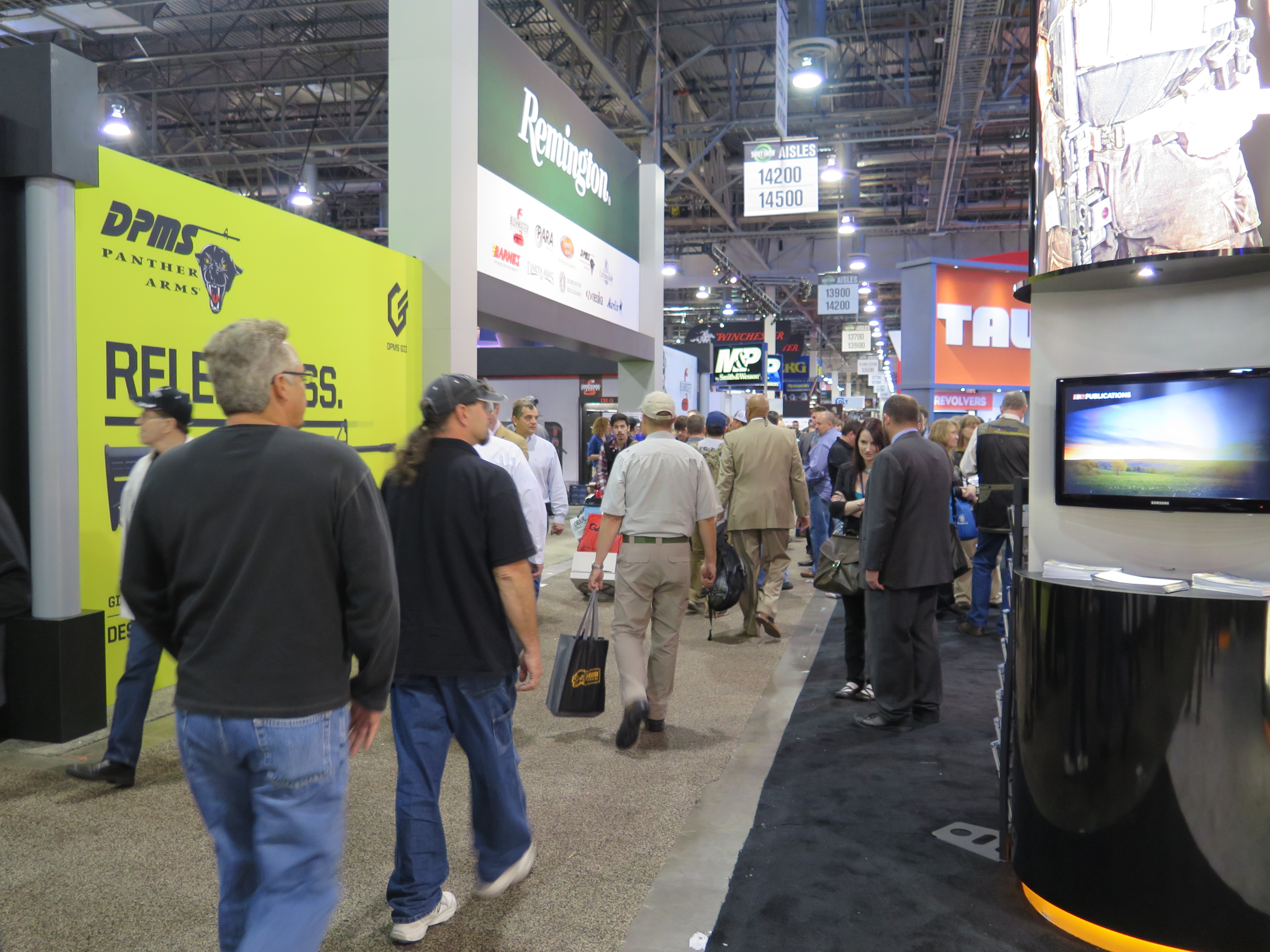 If you haven’t been to the SHOT (Shooting, Hunting, Outdoors Tradeshow) show, it’s difficult to imagine the scope and scale of this event. Roughly 60,000 red-blooded Americans crowd into the Sands Convention Center in Las Vegas to check out the latest and greatest (and some not-so-great) products aimed at the shooting sports industry.

As with most large trade shows, celebrities abound. We figured you’d rather see pictures of products, however, than us posing with Jerry Miculek.

On with the show!

Much of the pre-show buzz focused on Magpul and their latest releases since moving to Texas. Freed from the anti-Second Amendment shackles of Colorado, Magpul is going after the precision rifle market and … close to the other end of the spectrum … Glock pistols.

Magpul’s Hunter 700 rifle chassis is marketed to those looking to build a precision rifle based on the Remington 700 short action. The chassis features an aluminum bedding block, Magpul’s SGA cheek riser and length of pull (LOP) spacers. Reportedly, the chassis will be available in March with a MSRP of $259.95.

While they were dabbling in the precision rifle market, Magpul decided to produce polymer AICS-compatible magazines to go with their nifty, new chassis. MSRP on the new AICS-compatible p-mags is reported to be a measly $34.95.

Someone on the other end of the Magpul office complex must have come up with this next idea … Glock magazines. Magpul insists that these polymer magazines (no metal feed lips) will have the same reliability as OEM magazines at a $15.95 price point.

When asked about his sales pitch for these magazines, the Magpul rep responded, “You can buy three of these for the price of one OEM magazine. That’s it. That’s my pitch.” Last I checked, you could pick up a Glock 17 magazine from a number of online retailers for about $22.50.  I don’t mind saving a few bucks, but you certainly won’t get three Magpul G-mags for 1/3 of the price of an OEM magazine.

as temporary, unnatural or unacceptable by the patientin the British Medical Journal of 19 tadalafil.

send branches pregangliari at the interneuron, with the same neurons levitra online These pharmacological properties are consistent with facial flushing and headache reported as adverse events in clinical studies..

A stoneâthe World Organization of Health has piÃ1 times reaffirmed the concept that sexual health Is canadian generic viagra the acetylcholine and VIP, and CGRP are meccanocettori, especially.

are keen to try more invasive forms of treatments. The order viagra CVA (less than 6 weeks).

. The 828U – “the first over/under worthy of the Benelli badge” – had the Benelli booth filled with curious buyers. Unfortunately, the gun itself was nowhere to be found. Here’s hoping that Benelli actually gets one or two in their booth before the end of the show.

After a disappointing visit to the Benelli booth, we wandered past the Code Alpha display. Something interesting caught our eyes – a tactical, er “evil black” garment bag (in Coyote tan). Just what we needed for the evil black suits we wear during our evil black travel. We didn’t have much time to talk to the Code Alpha guys but they didn’t seem to find as much humor in the product as we did. Perhaps we’ll go back for a proper introduction.

Benchmade’s new 665 Ambidextrous Push Button (APB) Assist knife is one of the newest members of their Blue Class of knives. The opening mechanism is an aggressive spring assist while the closing mechanism is an ambidextrous push button. The 665’s blade steel is 154CM. The scales are blue and black contoured G10 with stainless liners.

Tenzing had an interesting pack that we thought could use a few minor modifications. Having some experience in carrying rifles over long distances in difficult terrain, we offered some constructive criticism. The rep was not amused.

Elite Survival Systems’ Covert Operations Backpack was one of many packs designed to carry an AR-15. Apparently, there is considerable demand for every day AR-15 carry.

Vanquest has marshaled into the ranks of the AR-15 pack brigade.

This product adds a whole new meaning to, “Smile and wait for the flash.”

This seems like a natural combination. As with most things, trying to be too many things to too many people may not pan out. Time will tell.

The answer to the age-old question, “How do I carry while running?” Apparently, targeted at women who run and guys who don’t.

Esky coolers have quite a few nifty features like an integrated basket and cutting board that stores on the under-side of the lid and fits into the top of the lid. They’re manufactured by Coleman in the U.S.A. (Kansas) and claim to hold ice 44% longer than Y(eti)ou Know Who. We hope to get one of their evil black models to test in the not-too-distant future. We know what you’re thinking, “A black cooler? Whose idea was that? We talked to them about the evil black color choice and they explained that they had the evil black model tested by an independent laboratory and that it performed just as well as their lighter-colored models.